I’ve got a Fiat Ducato based coachbuilt motorhome and take the view that it’s better to prevent thieves doing their deeds than retrieving one’s property afterwards. I live in it and so want to protect the contents as well as the vehicle.

To that end I’ve got deadlocks (www.locks4vans.co.uk) on the cab doors and very light tinting film on the cab door windows which will reduce the chances of a brick breaking the glass. Clear armour glass is also available I understand but the stockist didn’t have any when I was securing my vehicle head of a long trip. These particular deadlocks can only be operated from outside the vehicle.

On the habitation and storage space doors I’ve got the type of external locks that rotate and prevent the door being opened even if the main locks are forced. (Fiamma Safe Door Frame Security Lock)

On the windows I have devices (https://lock-m-out.co.uk) to prevent a screwdriver being inserted under the edge and the latch being forced.

Of course, nothing is guaranteed to stop someone who is determined, all one can do is to deter the opportunist. One needs to remain vigilant and keep doors and windows locked unless passing through them.

Rather than buy replaceable bottle of gas (Calor and others) many people opt to fit a refillable gas system in their motorhome or camper . These have a number of advantages.

1. The gas per litre is cheaper than in replaceable bottles.
2. There is no longer any need to hump bottles in and out of the gas locker.
3. When travelling outside the UK all that’s needed to refill is a set of adaptors retailing for £20 or so. Each country has a different bottle/regulator fitting so not only do you need to buy a bottle of gas you need to buy and fit a new regulator and pig tail.
4. There is no need to wait until the bottle runs out (usually when trying to cook a meal) before refilling. It can be done at any time convenient to you.

The only downside I’ve found is the initial cost of the cylinders and fittings. But I consider that the convenience has a value.

There are a number of systems available. At least two of which replace the bottles in the existing locker and others using a tank fitted under the vehicle. The advantage of the latter (a trick I missed) is that an under slung frees up the gas locker for carrying other things. It’s not for me to suggest what it’s used for, but being outside the heated area of the habitation it strikes me that it could be used for beer, wine or anything else which will benefit from being cool. It could also be used to accommodate additional leisure batteries.

Cylinders to replace the existing, https://www.gaslowdirect.com

Both replacement cylinders and under slung, https://www.gasit.co.uk

There may be others but I’ve not come across them.

A point to note when fitting. Fit the filler on the outside of the vehicle, not inside the locker. Some garages will not allow internal fillers to be used.

Different connectors allow one to fill from public toilet sinks and other taps where it’s not possible to fit a hose that reaches the vehicle. Outside taps with threads come in different diameters and there are sets of connectors that let one connect a hose. Also available are connectors that enable one to connect two hoses together to increase the length.

The bent funnel means that most of the water from the bucket/carrier goes in the tank rather than on the ground.

If the tank filler pipe is level, or nearly so, it is possible for some of the water to run back out while filling. To avoid this I use a short length of hose on a connector to reach into the tank. 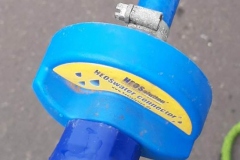