I had a need to visit the Royal Courts of Justice in central London before going on to meet someone in east London.

The prospect of leaving home in the midlands at silly o’clock and having to fight my way through London’s rush hour traffic really didn’t appeal so I decided to drive up the previous evening and park nearby overnight. I arrived in Lincoln’s Inn Fields at about 11pm; there was no one else about and no other cars in sight.

Before bedding down I read for a while. Apart from a couple of passing taxis and vans there was no disturbance. I woke at about six, had a leisurely ablutions and breakfast and read some more until the building opened.

Although the RCJ opens at 9am they don’t start dealing with the public until ten. Being at the front of the queue I was done and dusted within the hour and left Lincoln’s Inn at about eleven, well within the four hour limit for a disabled parking bay (I’m a Blue Badge holder). No people in uniforms with hats or nasty machines took any interest at all.

The only reaction was while I was finishing my breakfast tea. The curtains were still drawn but the side door was open. A woman walking past happened to glance in my direction and was somewhat bemused at the sight of a chap sitting drinking a cup of tea. I can’t think why.

Regarding the Congestion Charge; it only applies between 07:00 and 18:00, Monday to Friday. If you’re in before it starts and don’t drive anywhere during those hours, there’s no need to pay. However, most of the CC area only has parking for up to four hours. But there again, if one finds the locations of the cameras … 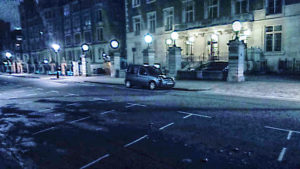 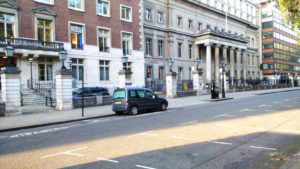