Finally, I got round to getting rid of some surplus “stuff” I was no longer using by dumping a couple of items on my sister. The old saying about one man’s junk was perfectly true. She was pleased with them and put them to use. Has it made any difference to amount of clutter in my house? Not that you’d notice.

She lives on the Somerset border so I decided to have a little mooch while I was in the area. 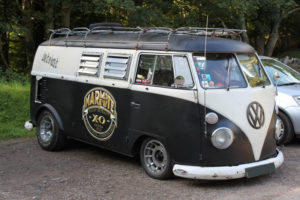 The spot where I stopped overnight is popular with dog walkers arriving by car. One that arrived just as I was about to leave was this rather interesting VW camper. Chatting with the driver, it was a personal import from the USA. It carries an early 1960s registration and is in very good condition for its age. It was the graphic on the side that caught my eye.

The stop is just off the A38 and I headed east along the A371 towards  Shepton Mallet intending to make my first stop at Axbridge. The road runs along the southern edge of the Mendip Hills which is designated as an Area of Outstanding Natural Beauty. On the other side of the road, the view is across the Somerset Levels and the Polden Hills.

A word of warning if you’re visiting Axbridge from the A38 direction. It’s a 60 mph road, the sign for Axbridge is a local black on white one nicely tucked away in the bushes, the exit slip is very short and the bend on the slip road is very tight. Not good if you’re driving a motor home and want to keep the crockery intact.

I completely missed the turn and sailed on along the bypass, only realising I’d gone wrong when I drove past a couple of buildings and realised they were the old station building and the goods shed. Needless to say, I soon found my way into the unspoilt village square .

A tip I’d picked up is to use a painter’s extension pole to mount a camera for a high level view. It’s a good way of avoiding the sides of a tall building leaning inwards and foreground in landscapes. The aim is to get the lens pointed at the centre of the object with the back of the camera (the film plane in old technology) parallel with it both vertically and horizontally.

If you’ve got a digital camera that allows remote control there are smart phone apps that can be used to do so via a USB cable. An important point to note though is that a USB signal has a limit of 5 meters (that’s just over 16 feet in old money). The fitting on the top of the pole really will not fit a camera screw thread (1/4 UNC) and so an adaptor will be needed. Bear in mind also that it will be top heavy. I have an idea to put some ankle/wrist exercise weights on the bottom to even out the weight distribution but haven’t got round to it yet.

Now, you’d think that having put the pole and camera in the motor and the smart phone in my pocket I’d remember the cables to connect the two wouldn’t you? Well, you’d be wrong. Hence I found myself looking for a computer shop to buy some. Yellow Pages smart phone app came to my rescue and showed a shop in Wells. How convenient that I was heading there but a shame it would be after I’d taken photos where the set up would have been useful.

Anyway, back to Axbridge …

From the medieval period, the area’s wealth came from the wool trade. At that time the River Axe was navigable as far as Axbridge. As with so many places, the river silted up and ships got bigger and so trade declined. During the industrial period iron ore was extracted from the nearby hills.

The railway ran from Yatton on the main line between Bristol and Exeter, to Cheddar and was later extended to Witham by connecting to the East Somerset Railway at Wells. It became known as “The Strawberry Line” because the area is a major producer of the fruit.

Cheddar is only some four miles east and entering the town I made the mistake of driving into The Cliffs, the road which leads into the gorge. If you’re using sat-nav and not entering the road name, check where it’s actually taking you, this is where mine (Copilot running on a small tablet) took me.

Gentle reader, I will spare you the shock I suffered as I crossed a narrow bridge built for a very different age and offer no photos. Every property, some extremely garish with the others trying to outdo them, is a tourist trap designed to separate the unwary from their cash. 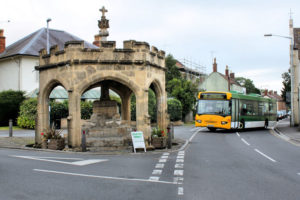 As soon as I could I turned round and found my way to the normal, everyday part of town which is as restrained and pleasant as one would wish. I have to say though, I found nothing remarkable about it that detained me for long and I carried on towards Wells. 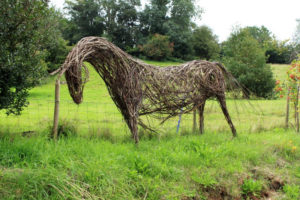 As I passed through Rodney Stoke, I saw a horse in a field out of the corner of my eye. When I looked again I saw something rather different and stopped for a closer look. I think it’s very well done and on first glance very convincing. 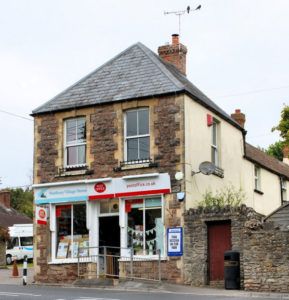 The next village is Westbury-sub-Mendip  which still has a village post office and shop. The village cross is nearby at the foot of School Hill. with St Lawrence church opposite. The Westbury Inn is round the next bend in the road and has a dog on guard who was making his presence known in no uncertain terms. 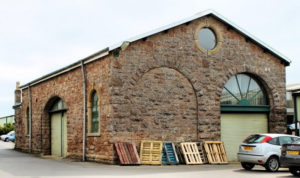 Presumably to avoid confusion with Westbury in Wiltshire this station was named Lodge Hill and the industrial estate which now occupies the site retains the name. All that remains of its original use is the goods shed.

Continuing on towards Wells I saw a brown tourist sign for Burcott Mill. Industrial archaeology is an interest of mine and I turned off the main road and found myself in Wookey (not be confused with Wookey Hole) before arriving on the B3139.

The mill is a large stone building now offering accommodation. There’s also a small shop which appeared to be closed when I arrived. The only admission to the mill seemed to be guided tours which were charged for. I decided to investigate the Burcott Inn across the road for lunch. 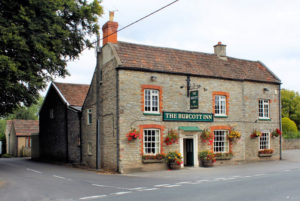 It’s a trad country pub offering standard pub grub, nothing fancy but decent quality. A nice touch is that they offer small portions for those with limited appetites. Don’t be put off by the fact they call them “pensioner’s lunches”. The landlord was very chatty and took an interest in my travels. He was able to offer some useful local knowledge.

The B3139 also goes towards Wells so I carried on and rejoined the A371 on the outskirts of England’s smallest city.

The computer shop I’d identified has two premises. As you might guess I went to the wrong one first. However, the chap was kind enough to point me in the right direction. If you can avoid parking in the centre of Wells I recommend you do so. It’s a very busy place catering for both locals and visitors.

The shop I was looking for was Microbitz in Broad Street. They had what I needed and I left a happy chappy. Later, I realised some other bits would be useful and went back. On both occasions Alex was extremely helpful offering thoughts and ideas to identify what was wanted to do the job. 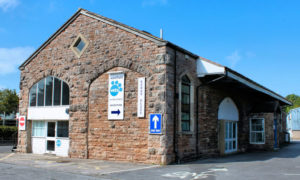 The first place I visited to take photos was the former Tucker Street station goods shed. Ian, the Burcott Inn landlord, had told me where it was. I made my first attempt to use the camera on top of the pole. I’m not unhappy with the result, but I think some refinement of kit and technique would help. First of all, being able to measure the height of the building so that I can calculate how high the camera needs to be. Yup, there are phone apps that will do that as well.

After that, I drove round to the Market Place. Parking is limited to an hour and Blue Badge holders can park without payment . There are a number of other car parks in the city which allow longer.

The centre of Wells is essentially unchanged for some eight hundred years since the Cathedral and Bishop’s Palace were built. Their entrances are directly off the central Market Place. For some reason the palace entrance is much grander and more prominent than the one for the cathedral.

Building of the palace started at about the same time as the cathedral in the late 12th century, but it wasn’t until some two hundred years later that  Bishop Ralph of Shrewsbury added the walls, gatehouse and moat. One has to wonder what he was so worried about to increase security to such an extent; did he not trust his flock? 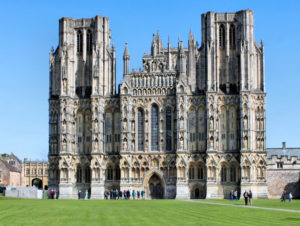 The cathedral’s west front really is a superb example of mediaeval craftsmanship and well worth a visit. The whole of the centre of Wells is worth visiting and the Wells Museum is nearby which provides a wider history of the area.

The High Street, Sadler Street and Broad Street still have local shops and hotels although the chains are creeping in. Further out are the usual supermarkets if needed including Waitrose with free wifi.

The afternoon was pressing on and I still had Shepton Mallet to visit so I set off.

I’ve been trying to remember to get a haircut for a couple of weeks (out of sight, out of mind applies here) and as I drove into Shepton I saw the very place, the Shearing Shed. A very appropriate name give the area’s history of wool production. I soon found somewhere to park the car and went in.

“Have a seat” said the lady cutting a gent’s hair. As my backside touched the cushion her colleague appeared and invited me to sit in the chair so she could do the necessary. The chap in the next chair assured me it was all part of the ladies fiendish plot which got the conversation off to a good start.

I soon left the shop carrying much less weight on my head and returned to the car to retrieve my camera. On the walk I’d seen the market cross down a side turning and went to look for closer access. 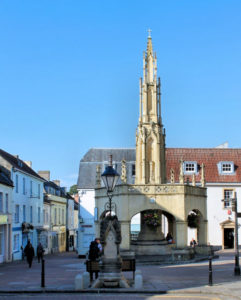 Access to the Market Place is heavily restricted so unless you’re disabled in a vehicle less than six and a half feet wide it’s really not worth trying. A wider vehicle will suffer damage as the road weaves between ancient buildings. There is parking with very easy access close by.

From here, the A371 turns away south into Wiltshire whilst my route took me north towards home. 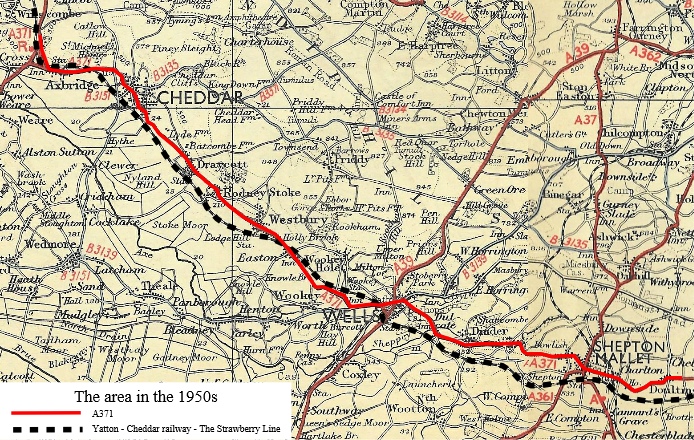