It was an idle moment and north is easier from my front door.

I joined the A49 at Whitchurch and carried on through Warrington until it joins the A6 at Bamber Bridge just south of Preston.

Continuing on the A6 one passes through Carnforth then on through Milnthorpe before turning on to the A590 then on to the A5074 to Windermere.

I found myself quite underwhelmed with Windermere due to an excess of grocklness so I drove on to Waterhead. I managed to find a quiet spot to spend the night in my little camper but I’ve since discovered it’s not allowed. Ooops. 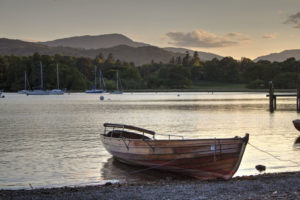 During the evening I went for a saunter to take a few photos and as darkness fell I found myself in the Waterhead Bar & Grill where I sampled a local brew, Blonde Boar from the Wild Boar Brewery.

It was a perfectly good standard bitter but at four quid a pint I didn’t feel inclined to overindulge. For gin enthusiasts, the WB&G is a delight providing a menu of the different gins they offer, several dozen, and a range of additions to one’s G&T. 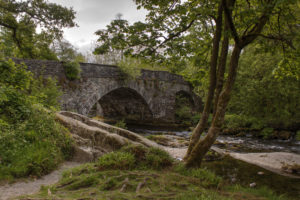 Upon leaving Waterhead the following morning I decided to “head for the hills” and my first stop was at Skelwith Bridge. After that I headed off along the B5343 until I got to Chapel Stile. Checking the map revealed nothing ahead that interested me, apart from some fantastic scenery, so I decided to head for the coast at Ravenglass.

Upon interrogating the sat-nav it showed a route a long way to the south via Broughton-in-Furness and it seemed to me there ought to be a shorter route. There is, via Wrynose and Hardknott passes. 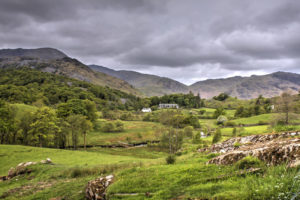 Not for the faint hearted, nor even the brave in bad weather. As the road climbs through Little Langdale it becomes narrower until it’s only wide enough for a single car and there are few passing places. The last sign of human habitation is as one squeezes past Fell Foot Farm. Then, the climb gets serious reaching a height of 1,290 feet before dropping down to Cockley Beck.

At Cockley Beck the main road, such as it is, turns right. Anyone getting this far who finds Wrynose challenging will have to reconsider their personal limitations because the gradient up to Hardknott Pass is one of the steepest on any road in England rising at 1 in 3 – some 30%. 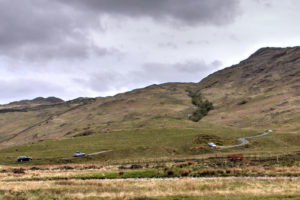 Not only does it climb steeply, but it twists and turns all the way to the summit. Those descending should keep a good watch for vehicles climbing and allow them a clear run.

Apparently, on a clear day, one can see the Isle of Man from the summit. This was not a clear day.

The descent down Eskdale towards the coast is easier but care is still needed. The road passes Boot station, the terminus of the Ravenglass and Eskdale Railway where one can travel by narrow gauge train to Ravenglass. 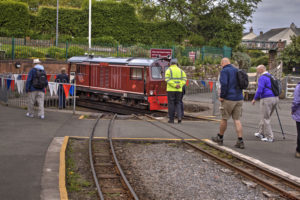 Arriving in Ravenglass, the Ravenglass and Eskdale Railway’s refreshment room provides a decent brew and other facilities.

Rather than stick to the main coast road, I turned off in to some of the villages. One was Silecroft which used to be a mining village hence the pub’s name, the Miner’s Arms. Sadly I was too early for early doors. I did strike lucky with the level crossing though. The Cumbrian Coast railway line passes through the middle of the village and as I approached the crossing the lights were flashing and barriers descending. I managed to get the camera out sufficiently quickly to get a shot of the train passing. 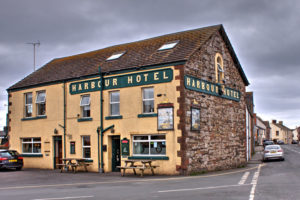 The next stop was in Haverigg. After photographing the Harbour Inn I thought it would be rude not to pop in and say “Hello”. Although they didn’t do any meals but recommended the village shop. There they sell some home made tray pies cut into slices. A couple of pieces of the steak variety made a good lunch.

After that, a pleasant drive along the coast road to Barrow-in-Furness where I did a bit of shopping before crossing to Walney Island where I spent the night.

It would have been nice to wake up to Walney Island bathed in sunshine. As it was it was raining and the weather forecast promised the same for the day. 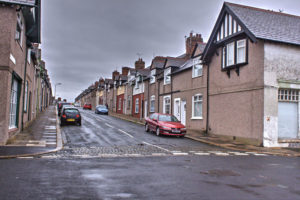 I don’t much like taking photos in the rain, everything looks dull and miserable, there’s no substitute for sunlight to bring everything to life. I limited myself to a few photos of Vickerstown (built by the shipbuilding company for their employees) and made an early start for home.