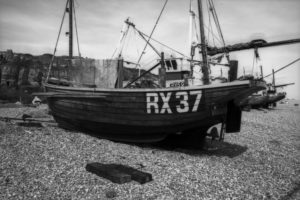 The last time I visited Hastings was on a day trip by train in 1993 so I thought it was about time to take a look around the area.

It was a good afternoon for a drive across the English countryside along shaded highways and byways, avoiding the motorways open to the burning sun.

I drove to Oxford then across to Reading, from there to Wokingham and on to Billingshurst where I joined the A272. That terminates at the A265 near Heathfield and after passing through that town one turns on to the B2096 through Punnett’s Town and on in to Battle town centre. It takes a bit longer but avoids the Sunday motorway rush from the weekend in the country.

On arrival at The George Hotel, Battle I discovered my first foul up. I’d failed to check that it’s a B&B. It’s not, it’s bed only.

What was the bar and dining area on the ground floor is now an Italian restaurant. I went in for a couple of beers and to relax before retiring to read.

Before doing anything in the morning, I went in search of breakfast and was directed to “Battle Bakes & Cakes” in the High Street almost opposite The George. They do a good selection of breakfasts including a decent Full English with variations as well as an excellent pot of tea. 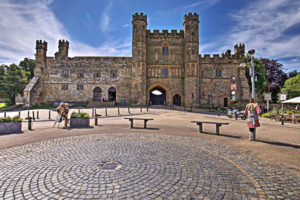 A short walk down the High Street brings one to Battle Abbey built by William the victor of the battle as atonement for the deaths he had caused by invading and setting his army against that of King Harold.

Within the abbey grounds there are two routes to walk. The longer, at about a mile and a quarter, goes out across the battlefield while the shorter is confined to the Abbey buildings.

The battlefield is now rough parkland with a few sheep roaming and has some wooden sculptures of Saxon and Norman soldiers dotted along it. Where it descends steeply the path is stepped and covered in bark.

There is little to see of the battlefield and the difficulties faced by the Norman army as the area now has a good deal of tree cover limiting long distance views. 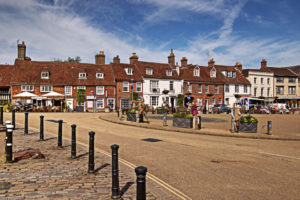 By the time I’d completed my tour of the abbey it was time for lunch and whilst taking some photos of the area in front of the abbey, Mrs Burton’s Restaurant and Tea Rooms caught my eye. By the time I’d had a couple of pots of tea, a very substantial lunch and feeling more than somewhat tired due to the walk and the weather I did little else that day.

Until I looked at the map, I’d not heard of Rye Harbour,  a couple of miles downstream from Rye.

As usual, I didn’t take the first route offered by the sat-nav and cut across through Sedlescombe to join the B2089 Udimore Road west of Udimore. The road runs along a ridge and there are views across the Tillingham valley although care is needed when stopping to take photos.

The road drops down the end of the ridge in to Rye which one skirts in order to get to Rye Harbour. Take the Winchelsea Road before turning on to Harbour Road. 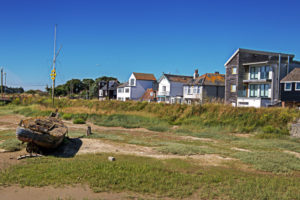 Rye Harbour is a very pleasant little spot with a lifeboat station, a pub and a few houses. The cafe, The Bosuns Bite, is well worth visiting for a decent brew and a breakfast sandwich. Sausage and mushroom with (at least) three bangers, enough sliced mushrooms to fall out the sides and properly thick cut bread and an pot of excellent tea.

Slightly apart from the village there’s a holiday village, i.e. a mobile home caravan site, with a Martello Tower guarding the entrance. 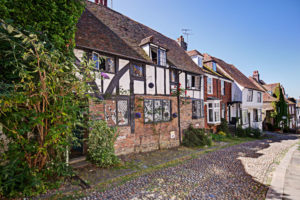 From there I drove back into Rye and had a quick walk along the Strand, up the much photographed Mermaid Street and back via The Mint. There is parking along Strand Quay, the A259, now the main road rather than a place where ships are unloaded. 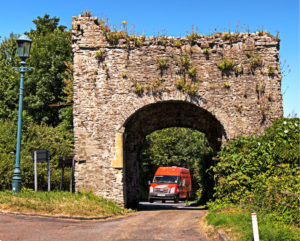 Driving towards Hastings the road passes Winchelsea. Climbing the escarpment and rounding the hairpin one is faced with an arch over a short stretch of road, a remnant of the old town wall. As I circled round and found somewhere to park, I saw an information panel describing the view and some of the history. Displaying that well known attention to detail for which local authorities are famous, the hedge has been allowed to grow so high anyone less than six feet tall hasn’t got a chance of seeing over it.

Arriving in Hastings I discovered the sea front car park I remembered from my last visit has been closed so I spent a while looking for somewhere to park, eventually finding another car park with all the disabled spaces in use so had to pay. 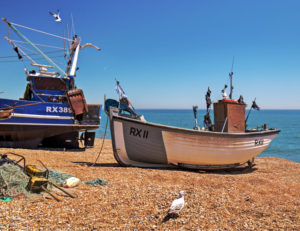 I had a walk along the beach and took photos of the fishing boats. Hopefully they’ll be able to increase the fleet thanks to events of late June 2016.

I was now in need of lunch and “eat @ The Stade” served up a very respectable ham and coleslaw sarney and a decent sized pot of tea with very good service.

The plan was to walk around Old Town and take some photos but my legs said “Not a chance” so I compromised with a swift pint of Harvey’s Best in The Dolphin before heading back to the car for a cigar and read and then returned to Battle.

Needing both a lens cloth and breakfast I enjoyed a happy coincidence as the optician is next to Battle Bakes and Cakes of breakfast fame.

After a breakfast of Eggs Benedict, toast and marmalade and tea off I set to The Observatory Science Centre adjacent to Herstmonceux Castle. An interesting place to visit quite unlike any science lab you’ve ever seen as it has flower beds and ponds in amongst the telescope housings. 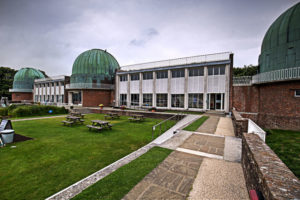 King Charles II set up the Observatory at Greenwich 1675 with the sole aim of calculating ships position at sea hence it was a department of the Admiralty. It wasn’t until the early 1950s that the circumstances were right to move the observatory away from Greenwich which was now in the middle of an artificially lit urban area with a great deal of atmospheric pollution. The new establishment was commissioned by the Admiralty and the architect was Brian O’Rorke who had previously designed interior for cruise liners.

Latitude is relatively easy as any star will consistently reach the same highest point in the sky. Its height in the sky changes with the observer’s latitude. The further one travels from the Equator, the lower the star will be in the sky. This concept was known and widely used from very ancient times.

To find longitude, one needs to know the time difference between astronomical noon at a fixed point on the Earth (Greenwich is still the reference point) and one’s location. One hour of time difference corresponds to 15° of longitude (360 degrees divided by 24 hours = 15 degrees per hour). Suppose an observer sets his accurate watch to 12:00 at noon in Greenwich, England and then travels a great distance westwards. The observer then notes that the sun is highest in the sky at 4:00 pm according to his watch. The observer then knows he is at longitude 60 degrees West (4 hours ×15 degrees per hour = 60degrees).

For people who like learning how the world works it’s a great place to visit.

More on latitude and longitude at the Nebraska Astronomy Applet Project.

Gardens aren’t my interest but I understand the castle’s are well worth a visit, although the castle itself isn’t open to the public. Being out in the sticks, don’t rely on public transport to get there.

After Herstmonceux I visited Pevensey Castle. It was originally a Roman fort built to defend the south coast and was the landing place of William, Duke of Normandy’s army during the invasion of 1066. It was during the following hundred years that the present castle was built. 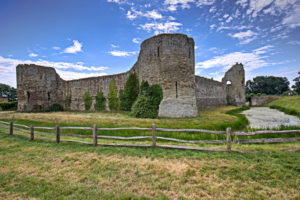 It has seen a great deal of conflict needing to be rebuilt a number of times and was used as recently as World War Two when it was manned by British and later American soldiers.

After taking a photo of the village pub, it was getting on for lunchtime and I decided to return to Hastings and take some photos of the Old Town. However, my legs complained at the prospect so I aborted the idea.

I didn’t really see the point of hanging around in my room in Battle for the rest of the afternoon and night only to get up early and drive home for an appointment, so decided to take the motorway to Banbury Cross Tobacco Stores where the owner blends his own pipe tobaccos and then headed home across country.

There is a great deal to more see and do in Sussex and I’ll be going back.