Continued from page 5, Belsen and Hameln

Both car and driver were in need of fuel so I went in search and was delighted to find a petrol station in Extertal, on Fahrenplatz the main north/south through road, that satisfied both.

The tank topped up and my fast broken I headed for Herford and the former Harewood Barracks where the regiment had been stationed in the late 1950s and early 1960s. 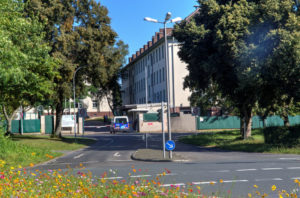 It was a disappointment not to be able to go inside the camp but it is now refugee accommodation. The chap on the gate was friendly enough and remembered the “Tommies” being stationed there but had his instructions, no admittance and no photography.

With that I headed back to Mike’s place near Detmold to pick up some bits I’d inadvertently left behind stopping for some lunch at Boeke Bäckerei in Kachtenhausen.

Later, Mike insisted on dragging me to his local Schützenverein (shooting club). The evening was spent swapping stories with a friend of Mike’s who had served in the Bundeswehr and shooting an air rifle on an indoor range. I think a couple of beers might have slipped down as well.

Returning to Mike’s I realised that this was the bank holiday weekend before the schools reopen and the ferries were likely to be packed so looked at times and prices. The cheapest I could find during the day was £112 but by waiting until 2am I got it for £52.

Mike was leaving for work early the following morning so I left at the same time. He suggested the bakery in the local supermarket for breakfast which has a petrol station opposite; so fuel for vehicle and driver. I then had a cross country drive to Dunkirk, contending with road closures and heavy traffic.

This time I found the aires on the Quai des Hollandais but since it required payment for facilities I couldn’t use I didn’t bother. Instead I drove on to the ferry port.

Arrival was at about half-past ten and I was pleased to find they booked me on to the midnight sailing which meant a Dover arrival of 1am UK time.

Driving out of the town on the A20 towards Folkestone there is a large lay by where I stopped and got some sleep.

Into Folkestone for breakfast and then carried on cross country through Kent, Sussex, Surrey, Berkshire and back to the Horse Guards at Brokenborough in Wiltshire for an evening meal. My only reason for going back was to pay the bill I’d forgotten about three weeks previously. Arthur, the landlord, didn’t seem too upset ‘cos I ended up spending even more.

On Sunday I woke early and drove home.