I crossed the border and passed through Customs at about 08:00 in the morning. The main thing I was asked about was beer. He lost interest in tobacco when I said all that I had had been bought in the EU. Since he didn’t mention wine or spirits I didn’t say anything about the half finished bottle of whisky in my wardrobe.

Part of the plan was to visit some army camps at which elements of my regiment had been based in the late 1970s whilst on arctic warfare training. Arriving at Trandum, scarcely had I lifted the camera than some busybody civvie security guard came charging across the car park screaming “No photos”. Like the rest of us, I’m all for security but the only item of strategic or tactical interest in sight was a WW2 Sherman tank in the general car park. Even when I explained what I was about he refused. I guess he never took his King’s Kroner.

On the way to Stavanger I stopped and entered the various towns into my route planner and discovered I wouldn’t reach the North Cape in time for the summer solstice so I took a more direct route.

A few places in passing.

There are over a thousand road tunnels in Norway, some only a few tens of yards long. The longest is nearly 24.5km (15.23 mi). The last time I drove through such long tunnels I was working on the London Underground’s Piccadilly Line and there weren’t any roundabouts either.

This is two tunnels with a connecting bridge.

Sadly the original mediaeval town of Voss was destroyed during World War Two. It’s now almost all concrete and glass.

I needed a break from driving so stayed at Holmen for a few days. 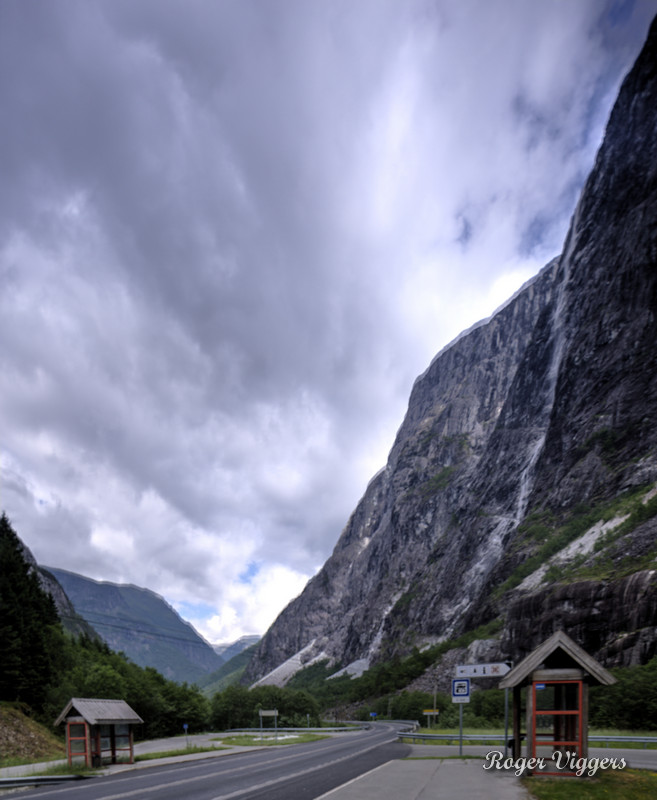 When I came to move the electric step decided to mess about by not retracting fully. Something was jamming it so I drove on to find someone to have a look. When I stopped the step has vibrated back in and now seems to be OK if a tad stiff.

One thing I didn’t expect to see when leaving Fretheim tunnel was a stonking great cruise liner, the Norwegian Jade, over a hundred miles from the sea. The ship is 965ft long, 125ft beam, 27 ft draught, displaces 93,558 tons, carries 2,402 guests and has 1,037 crew.

A stopping place a few kilometres north of Beitostølen, above the snow line. When I arrived it was still warm and sunny with a nice breeze, until it started raining.

Near Høvringen I joined the E6, this is the main road from Oslo to Kirkenes in the far north of Norway, over 1500 miles.

One of the army camps I did manage to visit was at Hjerkinn. It’s now a hotel and pilgrim centre. It turned out that the one my comrades had used was about ten miles away. Serving the sparsely populated area is an extremely well maintained railway station.

The E6 passes through the pleasant town of Levanger.

My next night stop was near Trondheim and I went into town in the morning. It was making an effort to rain so I passed on any sightseeing. I did make one call though.

If you’re thinking to yourself, “That’s got all the makings of a first rate tourist trap”, I would not want to discourage that idea. Inside there is nothing except a souvenir shop and an eatery.

Although many headlands and islands have been connected by bridges, there are some still reliant on ferries, Bognes – Skarberget is one.

At Ankenesstrand there is the Krigs Monument Narvik 1940 to the British, French, Polish and other Allied soldiers who died in the Battle of Narvik 1940.

Alta stands at the head of the Alta fjord, at one time Germany’s largest naval base outside Germany. Kafjord is a branch over forty miles from the open sea where the Tirpitz was anchored at the time of the X-craft midget submarine attack in September 1943.

I met up with Facebook friends Monica and Chris at the Tirpitz Museum. Chris’ uncle was crew of one of those which was lost with all hands. It was Chris’ mother’s wish to have her ashes scattered at the same spot which was the reason for their trip.

The museum is a private project and one of the better private museums I’ve visited with the exhibits well set out and good descriptions. Well worth visiting if you’re in the area.

Items are still being recovered from the site some of which have been preserved in the fuel oil which has collected at the bottom of the fjord. The white tunic was one such item. The oil is removed with solvent and the item washed normally.

Leaving Alta the road crosses the head of Altafjord as it continues to the North Cape.

On the road to the North Cape.

The North Cape is on the island of Magerøya which is reached by the North Cape Tunnel which is 6.87 kilometres (4.27 mi) long and reaches a depth of 212 metres (696 ft) below sea level. It has its own micro-climate and fog or ice can occur inside the tunnel, even in summer.

Arriving at the end of the road at North Cape the first thing one sees is a ticket office at which one pays to visit this natural feature. Admission includes overnight parking and entry to a tourist visitor centre and display.

On the dot of midnight local, the sun gets no lower than 4.7deg above the horizon at 71deg 10mins 21secs North.

As I walked around this morning what seemed to be low cloud swept across the area. After driving back south I found that the cloud was sufficiently low that it met the sea at Skarsvag, the world’s northernmost fishing village. It’s just as well I arrived a couple of days before the solstice as the overcast remained for several days.

Having got as far north as I could go, I set off southwards intending to visit Honningsvåg. Sadly the motor had a different idea and expired less than five miles down the road. No horrible expensive sounding noises. It just cut and refused to restart.

A phone call to my bank soon had a recovery motor on its way. The recovery lorry picked me up and took me to his workshop in Honningsvåg. Not having anyone available to sort the problem he took me to a Fiat garage in Lakselv, about a hundred miles south.

According to the recovery driver (a former fisherman) boats over a certain length are restricted in the tonnage they can catch and land. Under that length there is no restriction hence the stumpy appearance of the blue and white boat in the photo.

By the time we got to the garage in Lakselv it was late afternoon and there wasn’t time for the mechanic to make a start. They did let me stay in the motor while it was parked on their yard which saved moving out into a hotel.

The following morning one of the mechanics came over with his computer to try and identify the fault and was caught out by the driving position. The computer suggested that the problem was the immobiliser / fuel cut off. Given the symptoms that made sense, however resetting the cut off didn’t restore the engine to life so they kept digging.

There was no electricity supply to the injectors but the cause had not yet been found. There were no fault codes to give a clue.  It did run on a squirt of gas though.

The garage settled me in for the weekend by filling the water tank and set me up with mains power supply.

On the Monday the garage identified the problems. Yes, there was more than one.

The camshaft sensor was dud and the fuel pump was leaking fuel back past a seal. Now came the fun bit. There were no new replacements in Norway. A scrappy in Stavanger had them in stock second hand.

The estimate for delivery and fitting, including renewing the timing belt and the time already spent on it, was the best part of £2500.

It took a few days for everything to come together, so while the garage worked on the motor I’d gone for a look round Lakselv and the nearby port of Hamnbukt.

The mechanic thought the broken part in the fuel pump had failed some while ago and was not the cause of the total failure. The motor seems to be running quieter and easier so hopefully I’ll get some of the cost back in saved fuel.

I finally got away from the garage, a week after arriving, in the late afternoon and headed for Kirkenes where I found a motorhome stop near the harbour.

I had a little wander round Kirkenes town centre (it’s difficult to have a big wander) and took some photos before heading for Finland.

The idea of a small children’s play area in the pedestrianised high street is a good one and worth copying.