Arrived in Tønder, just north of the border, where I found free parking on the edge of the town. It was bright and sunny and nearly time for lunch so I decided to take a break and give some thought to my route northwards.

Overnight rain led to a pleasant but dull morning. A 600 meter walk took me to the town centre where I drew some Danish Krone and had breakfast before driving north through Esbjerg and along the coast.

A turnoff took me to the island of Rømø where Lakolk beach is firm enough to allow motor racing.

As I drove on to the beach I saw a number of motorhomes parked around the area. Heading for one group I felt the ground getting soft I thought it didn’t feel firm enough so made a large turn to regain firm footing. That’s when I found the even softer patch. A couple of chaps came to help, one had some old carpet which he’d had to use previously. Still no joy. A very helpful chap with a large tractor and a tow rope appeared and that defeated the sand.

At another beach stop I got chatting with a German chap. He was amazed that an English language sketch, “Dinner For One” broadcast every Christmas/New Year on German television is virtually unknown in the UK.

When we got to talking about our vehicles’ reliability I mentioned that I’d been fortunate that when the starter motor had failed the vehicle battery was also defective. He thought this example of “British humour” so amusing he was almost rolling on the ground.

Near Klitmøller German WW2 bunkers built on the beach to defend against Allied invasion are still in place. The beach is about two hundred yards deep backed by steep dunes. They’re covered in graffiti which I consider an eyesore, but I thought the octopus was decently executed with some relevance to the location.

A little further north at Hanstholm there are more bunkers set back from the shore and buried in the dunes.

The Strand at Løkken is also very firm sand. The Strand in London has the same derivation; a Norse word meaning a shore. The Thames used to be a lot wider than it is now; it was the building of the embankments in the nineteenth century that channelled the river into its present course.

Several dozen people stopped to watch the sunset, some came specially. After sunset, the beach cleared. I didn’t fancy being so exposed and moved on, finding a convenient stopping place a few miles north.

I set off for Skagen the following morning along a variety of roads passing this windmill along the way.

Skagen stands at the northern tip of Denmark where the North Sea meets the Skagerrak which is the only access to the Baltic Sea. Scotland is some 500 miles westwards.

The town has become a major calling point for cruise ships and the Aurora was visiting when I was there. About two cruises a week call. Before the dedicated quay was built visitors were ferried to shore in small boats. 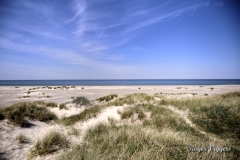 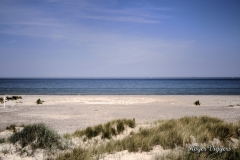 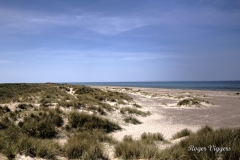 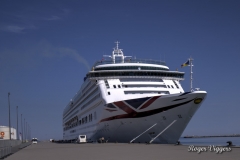 Den Nye Lillebæltsbro (New Little Belt Bridge opened in 1970) connects Jutland on the mainland with Funen, the third largest of the Danish islands. Below the bridge is a slipway for small boats with plenty of parking and I had a good night. There is an older bridge opened in the 1930s but it was closed when I was there.

Hidden in the long grass were a number of small boats. One of them looked familiar, appearing very similar to a style I saw in the Shetlands last September. Not surprising really, as the Vikings brought the design with them when they crossed the North Sea a thousand years or so ago.

I was in need of a haircut and some bits and pieces from the apothecary (chemist/pharmacy) so crossed the bridge in to Middelfart.

To get to Sweden I crossed the Oresund Bridge (the one in the TV series) and headed north passing Malmo and Gothenburg.

I was hoping to make it into Norway in one day but I was delayed by ear stationary traffic on the motorway in Gothenburg. I was only about fifteen miles short of the border when a rest place invited me in so I stopped for the night.