Half an hour or so after leaving the battlefield I arrived in Mechelen once again. The shop I was looking for was now open. 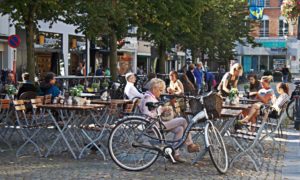 One of the noticeable things about Mechelen from an English perspective was the large number of bicycles in all sorts of configurations for carrying both adults and children. Doubtless they would be considered “dangerous” in the UK as some of them had the children in front of the front wheel.

When visiting somewhere new I like to find the things and places that make it different. Since I smoke a pipe that includes tobacco and the shop I wanted to visit is the oldest tobacconist in Belgium. Hence my visit to Huis Windels.

Not only do Windels sell a wide range of tobaccos from various countries, they also produce their own tobaccos; Semois fijn (fine), Semois half grof (semi-coarse) and Semois grof (coarse). I found they do taint a briar slightly so I smoke them in a cob or a Meerschaum.

Naturally they offer a range of pipes for sale and one in particular caught my eye, an Italian made Brebbia First Grande Calabash. It was supplied with two stems, long and short. It wasn’t cheap but what’s life if you can’t indulge yourself now and again, especially when on holiday.

Not only do Windels sell tobacco but they keep a good range of one of life’s other pleasures, spirits, with an especially good stock of whiskies, quite literally shelves of it from floor to ceiling. 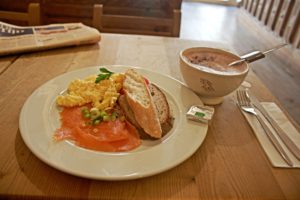 The service and the food, scrambled eggs, smoked salmon accompanied by two types of bread and hot chocolate in a bowl the size of a small boat, were excellent.

Sadly I didn’t have time for sightseeing but I hope to visit Mechelen again.

Avoiding the motorway, I headed westwards on the N16. In Willebroek the road passes over the Brussels–Scheldt Maritime Canal on a massive lift bridge. 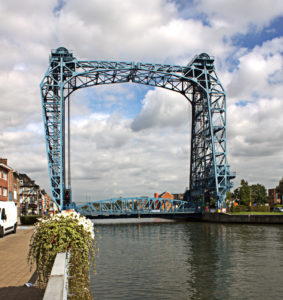 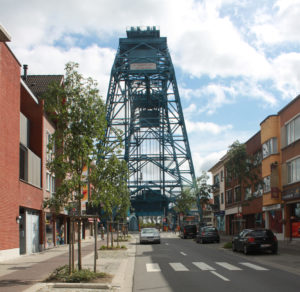 Unfortunately I have to use a seat/walking stick. Needing two hands for the camera, I leant the stick against the fence. I then wondered if it would stay in place or fall. My question was answered by the stick disappearing from sight rapidly followed by a resounding splash. Fortunately, I had a spare in the car and was able to hobble back. Definitely one of those Ohdearmewhatashamenevermind moments.

I realised I needed fuel and approaching a petrol station was a bit perplexed when I couldn’t see any obvious driveways across the footpath. No one batted an eyelid when I stopped at the pump and filled up so I guess it’s their way of doing things.

I drove on through Dendermond before joining the motorway.

My next stop was to be near Ieper (or Ypres as it was previously known) in the village of Zandvoorde.