The next place to visit on this trip was the small village of Zandvoorde near Ieper. Again the reason is a regimental connection.

In October 1914 the Household Cavalry formed 7th Cavalry Brigade and were defending the ridge at Zandvoorde. On the Thirtieth they came under an overwhelming German attack and were driven back suffering a great many casualties. 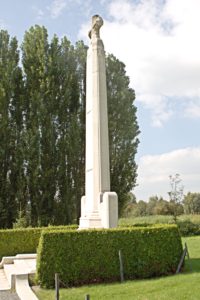 One of those killed was Charles Pelham, Lord Worsley, commanding a section of machine gunners. A German officer, Oberleutnant Freiherr von Pranckh, made sure that Pelham’s remains were properly buried and the grave marked. He also made a drawing showing the precise location and took Pelham’s personal effects in order to return them to his family. Unfortunately von Pranckh was killed and Pelham’s effects lost. The map did eventually find its way to Pelham’s family and was used to recover his body for reburial in Ypres Town Cemetery. 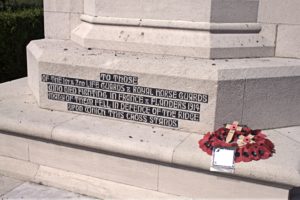 At the time, the plot was surrounded by open fields. The village has expanded and the memorial is at the bottom of someone’s garden accessible by a narrow footpath from Komenstraat.

Time did not permit a more through exploration of the village, I had another stop to make a short distance away in Zillebeke.

Zillebeke churchyard has been described as the Aristocrats’ Cemetery due to the high percentage of casualties interred who were from the nobility. There are thirty-two Commonwealth burials and commemorations of the First World War. Fourteen (mainly officers) belonged to the Foot Guards or the Household Cavalry who died in 1914. Six of the burials are unidentified and special memorials commemorate two casualties whose graves were destroyed by shell fire. 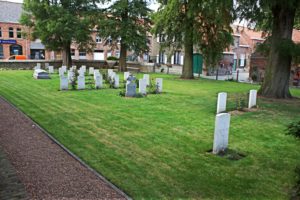 The headstone of Lt-Col Chesney Wilson RHG has the first two lines of a poem inscribed at the base. In full it reads:

Life is a city of crooked streets.
Death the market place where all men meet.
If life were marchandice that men could buy
Rich men would ever live and poor men die.