With the two hundredth anniversary of the Battle of Waterloo approaching in June 2015 I decided to create an online memorial to the men of the Household Cavalry who fell during the battle. My interest comes about through having served in The Life Guards.

I felt the need to add something more than a dry description and a list of names and so decided to visit the battlefield and take some photos. To that end I booked myself on to the 6 am Dover to Dunkirk ferry on a Monday morning in early September 2014.

This was only intended to be a flying visit with little time for other sightseeing; my return ferry was booked on the following day at 6 pm.

I didn’t really fancy leaving home in the middle of the night so had a leisurely drive to Kent on the Sunday afternoon/evening and spent the night in a lay-by on the A2, about twenty minutes away from the ferry terminal. The fare at that time of the morning was less than £40.

By notifying the ferry at the time of booking that I’m a Blue Badge user I was allocated a parking place near the lift. Checking in at the ferry terminal, boarding and the crossing were totally uneventful. As you approach the check in, they’ve read your number plate and have the details on their screen – job done. Despite the time of morning and hearing the same questions from passengers over and over again the staff were cheerful and helpful.

Disembarking from the ferry is equally straightforward, just drive off the ramp, remember to keep to the right hand side of the road and follow the signs for your destination, if you want to use the motorways that is. If you want to use other roads then some planning is needed.

Rather than follow the usual route straight on to the motorway I took the D601 road that runs into Belgium through the town of Dunkerque and onwards through the towns and villages between the motorway and the coast before joining the motorway a few miles further on. I found I got used to driving on the “wrong” side of the road a lot quicker and it’s a lot more interesting.

My first call on the battlefield was at Mont Sainte Jean which was the British field hospital during the battle. It stands on the N5 Chaussée de Charleroi (the Charleroi-Brussels road) directly opposite the end of the northbound slip road from junction 26 of the R0 motorway. There is nowhere to park immediately nearby so care is called for. There is a retail park to the north of the motorway, including a Carrefour supermarket, with parking for their customers. 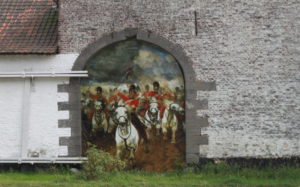 The farm buildings have been restored in recent years and a reproduction of Lady Elizabeth Butler’s famous painting “Scotland Forever!” (depicting the Royal Scots Greys at the charge) now adorns the massive barn doors and  plaque on the wall commemorates Deputy Inspector John Gunning, the senior medical officer, and his staff during the battle. 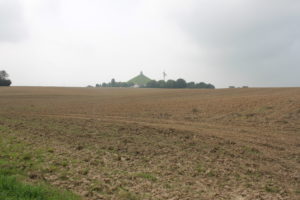 Almost opposite is the field in which the Household Brigade (the 1st Life Guards, the 2nd Life Guards and the Royal Horse Guards) spent a very wet night on 17th – 18th June 1815. It rained almost all night and there was no shelter for men or horses. By morning, they were sodden and as the rising sun warmed them steam arose from their mud covered scarlet and blue uniforms – a far cry from their customary immaculate turnout when on duty as King’s Life Guard at Horse Guards. The Union Brigade (formed of the 1st (Royal) Dragoons, 2nd Dragoons (Royal Scots Greys) and the 6th (Inniskilling) Dragoons) spent an equally unpleasant night in the field on the eastern side of the main road.

Less than a mile to the south the land rises to the Mont Sainte Jean ridge which Wellington used as his defensive line. The main road continues south to Genappe (where a detachment of the 1st Life Guards had fended off French cavalry on the eve of Waterloo), Quatre Bra (scene of the first engagement between French and Allied forces) and on across the border into France.

On the summit is a minor road known as the Ohain road at the time of the battle. Now, the road to the museum is the Route du Lion. This cross roads was at the centre of the British line. In 1815 the ridge was higher than now and the Ohain road a narrow sunken lane.

Turning right brings one to the Museum and the Wellington Café. New buildings were being erected and existing ones refurbished at the time of my visit, hence the crane and other building equipment in the photos.

Included in the Museum is a circular panorama depicting the battle. It is an oil-on-canvas painting with fourteen panels forming a cylinder about 360 ft round and some 39 ft high.

Also within the Museum is the Lion Mound built at the behest of King William l of the Netherlands and is on the spot where Prince William of Orange was injured by a musket ball. It is 141 ft high, 543 ft in diameter and there are 226 steps to the top. The material used in its construction was removed from the top of the ridge and the surrounding area, thus the landscape is different now from the time of the battle. It is said that the Duke was less than impressed when he visited some years later. From the top of the mound one can survey the entire battlefield.

At the museum is a fork in the road. The left fork, the Chemin des Vertes Bornes,  takes one to Hougoumont Farm. However, at the time the road was closed due to the building work so I returned to the main road, drove south and turned eastwards on to the Chemin du Plancenoit. Although it’s marked on maps as a road, I really don’t recommend using it. It’s a farm track, and not a well maintained one at that.

As I approached Hougoumont it was plain that it was a building site as there was a crane towering above and scaffolding surrounding the buildings. Not being sure how I would be received I decided to make my planned visit to Mechelen, a town to the north of Brussels.

Where the Chemin des Vertes Bornes becomes the Chemin du Goumont there is a link to the Chaussée de Nivelles which I used to regain the northbound motorway.

Arriving in Mechelen, I discovered that the shop I was planning to visit didn’t open on Mondays. When the small tablet I use for sat-nav stopped working, it alerted me to the fact that my car phone charger had given up and so went in search of a replacement. I found an excellent little shop in Hoogstraat, Foto & Multimedia.

Travelling back to Waterloo I encountered the Brussels rush hour on the ring motorway. The M25 has serious competition! The volume of traffic is compounded by junctions very close together, in fact a couple of them overlap.

Arriving back in the Waterloo area, I needed to get something to eat. The Carrefour supermarket on the roundabout was closing so I went to one of the petrol stations on the Chaussée de Nivelles and stocked up. I then retired to my campsite and read for a couple of hours before turning in.

The following morning the builders restoring Hougoumont arrived for work as I was breakfasting and I decided to have a closer look. 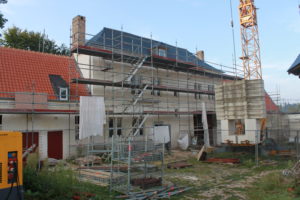 I parked by the builders vans. As I was getting my camera out one of the builders walked past. Apart from a polite “Bonjour” nothing was said so I took this as a cue that they weren’t going to get excited if I looked around. If I’d tried wandering round a British building site the Health and Safety police would have been all over me, especially as I was wearing only a shirt, jeans and flip flops.

It seems that the Belgians have a far more sensible attitude to these matters and apart from polite greetings nothing was said by the people working on site.

During the battle Hougoumont was defended by elements of the Coldstream Guards, the Scots Guards and the Grenadier Guards with elements of 2nd Nassau Regiment and 1st (Hanoverian) Brigade in the woods to the south. Eventually the German units were pushed back and joined in the defence of the farm. They were hard pressed all day and had difficulty getting fresh supplies of ammunition through.

Upon leaving Hougoumont, I aimed for Napoleon’s command post at La Belle Alliance. In the interests of variety I went on to the Chaussée de Nivelles to  the south of the battlefield and along the Chemin de la Maison du Roi; this is mostly a single track road and not in the best of condition. I travelled it at the tail end of the morning peak and there was a fair amount of traffic passing in both directions. 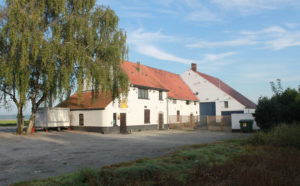 La Belle Alliance and the Chemin de Plancenoit are only a few yards behind the ridge on which the main French artillery battery was situated and provided a good view of the British position. The area is unchanged since 1815, although the main road was probably not as good then.

Following the path of the French Cavalry north for some 1200 yards along the Chaussée de Charleroi brings one to La Haye Sainte farm, only about two hundred and fifty yards south of the crossroads. During the battle it was defended by the 2nd Light Battalion King’s German Legion with elements of the 1st Battalion. 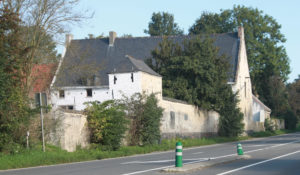 The KGL was an unusual unit. The Elector of Hanover Germany, was also sovereign of the UK, King George III. When Napoleon ousted the Elector and government of Hanover many of the Hanoverian soldiers fled to the UK where they were formed into the KGL. Although part of the British Army they were an autonomous unit with their own officers and ways of doing things.

When the French forces were in danger of overwhelming the defenders of La Haye Sainte the Household and Union Brigades were sent forward. The British heavy cavalry swept down on the attackers routing them and giving the Legion soldiers much needed relief.

This brought me to the end of my tour of the battlefield and I headed once again to Mechelen.