I decided to take myself off for a little trip to Spain over Christmas and New Year.

After looking at ferry fares, mileage and the cost of fuel I decided the DFDS Newhaven to Dieppe ferry was the best option and made my way to Newhaven for the midnight sailing. A 5am arrival in Dieppe allowed time for a decent kip.

I’d managed to spend all my UK currency before getting on the ferry only to discover their card machine system was on the blink. Fortunately I wasn’t planning on buying much more than a late night drink and one of the ship’s officers helped me out with some tokens for the drink machine.

Immediately after clearing the ferry terminal I spent a while chasing my sat-nav in search of a cash machine until realising it was lying to me and crossed the river into the town centre. There is parking in the Place Saint-Jacques where I got my head down for a few hours before having a stroll round. 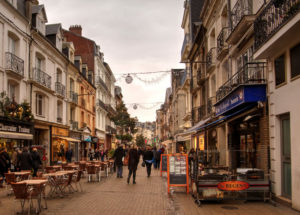 None of my sims would connect. Spying an Orange shop I bought a PAYG sim. The tablet didn’t want to play with this foreign stuff but the helpful chap in the shop beat it into submission.

After a walk round taking photos I became very annoyed with myself discovering that I’d left my camera battery charger at home. However, all was not lost as I have a power pack with a battery substitute cable end which can be charged via USB. It’s a bit cumbersome but does the job.

In the later afternoon an hour’s drive took me to Place du Général de Gaulle, the town square, in Bacqueville-en-Caux.

Come the morning I took a walk round and made my first visit to a French café, the Le Petit Vincennes which faces on to the square. I wasn’t the only customer by any means and most of them looked as if they were settled for a session of exchanging the news of the day while enjoying some wine or beer or coffee. I’d not sampled French style coffee before; it’s served small and strong. The proprietor was kind enough to point me to the loo.

Twenty minutes along the D149 brought me to Doudeville. The road avoids the town centre but a couple of interesting buildings caused me to stop and look round. Entering the square, I found it was named Place Général de Gaulle. I came to realise that many thoroughfares are named after notable people from the nation’s history, not only the World War Two leader of the Free French.

Turning into a pedestrian only street, the Rue de l’Hôtel de Ville, I stopped to look in the window of Charcuterie Carpentier. A phrase book will tell you a charcuterie is a delicatessen. Well, yes it is, but don’t expect it to be like so many British delis which sell a few exotic salamis and tins of imported produce. Most of those I saw offered much more. The item that caught my eye is best described as a ham and creamed cheese croissant which made an excellent early lunch.

Something I did notice when going into shops and other places was that the French people are quite formal and one is invariably greeted with a polite “Bon Jour” and a response is expected.

Continuing along lesser roads brings one to Harfleur. This was the main port for this part of France for many centuries until Le Havre was developed. It has its place in English history as the town to which Henry V laid siege in 1415 and where William Shakespeare would have us believe the king encouraged his soldiers with the cry of “Once more unto the breach, dear friends, once more.”

As the Route d’Oudalle becomes the Avenue de la Résistance there is a large car park. Despite now being a suburb of Le Havre, Harfleur retains much of its ancient port atmosphere and there are still steps down to the water. 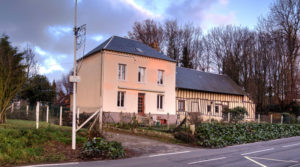 On my way in to Harfleur I’d noticed signs for “Rogerville”. With my name, how could I not go and take a look? I found myself somewhat disappointed. What had obviously once been a very pleasant rural community has been spoiled with estates of modern houses. The 1960s song about boxes made out of ticky tacky came to mind.

Evening was approaching as I arrived at Aire de la Baie de Seine at the north end of the Pont de Normandie. It’s been designed as a destination as the walkway extends to provide views of the bird sanctuary and there is a restaurant in the bridge building.

Acting on a recommendation I headed for Honfleur in the morning after shelling out €6.30 for the bridge toll. I was hoping to stop and have a look round but the town was very crowded. All the car parks I saw had height barriers, with nowhere else to park I ended up driving through. It did appear to be a town worth visiting and I shall try to return.

The road southwards from the town centre brings one to Équemauville where I made my first visit to a French supermarket for food and some domestic items. In the drinks section there were a number of local ciders on offer. I thought it would be rude to visit the area and not sample the local produce so bought a bottle of Cidre de Normandie, by La Fauconnerie, and excellent it was too. 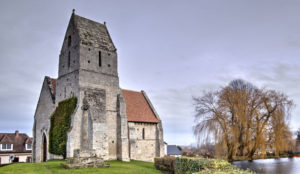 The road westwards leads to the coast at Pennedepie and then the village of Cricqueboeuf. The church appears extremely ancient and has slits for windows giving it an almost fortified appearance. It stands next to what appears to be a mill pond. Across the main road is a small parking place with an information board.

Approaching the Orne river estuary the road turns inland to Ranville where it crosses the Caen Canal and the river. These two bridges were the first locations attacked by Allied Forces on D-Day, 6th June 1944. This was Operation Deadstick carried out by ‘D’ Company, 2nd (Airborne) Battalion, Oxfordshire and Buckinghamshire Light Infantry with an attached platoon of Royal Engineers who arrived in Airspeed Horsa gliders flown by soldiers of the Glider Pilot Regiment. 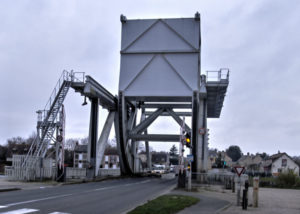 The bridge over the canal is now named Pegasus Bridge and that over the river is Horsa Bridge whilst the road adjacent is named for the leader of the operation, Avenue Major John Howard. A museum dedicated to the action stands on the corner. The cafe which stands by Pegasus Bridge, Café Gondree was the first house in France to be liberated.

Continuing along the coast where the D-Day landings took place, I stopped for the night in the aires at Arromanches-les-Bains which has a combined water, waste and sewage facility. It’s in a side turning off the Rue François Carpentier, the D514.

Having spent these few days getting acclimatised to life on the right hand side of the road it was time to head south.

Continued on Page 2, The Road To Andorra